I heard the other day that some people have been given a sticker when they are vaccinated against Covid and that these are being sold on eBay to idiots who want to avoid being vaccinated. Maybe it’s apocryphal, maybe it’s true, but it is made believable by the conspiracy theorists and Covid deniers who think there is no killer disease, just a government conspiracy or the adverse effects of 5G phone signals. I imagine them sitting at home with cones of foil on their heads with their phones and computers in Faraday cages and a baseball bat handy in case of a zombie attack.

The US has no monopoly of nutters… we grow them here too. It doesn’t matter what mainstream media or scientists say, the idiots are cocooned in the interweb, where each niche has an ‘understanding’ all of its own. The net is a fantastic resource and a major problem as it lends itself to misinformation; any idiot with an axe to grind finds an audience, adherents and zealots. The more wild the idea, the more followers it accrues! Rabid racists and white supremacists, holocaust deniers, jihadies, followers of David Icke or Rudi Giuliani et al fill the net with nonsense, a daily diet for those with too much time on their hands and too little wit.

Back in the day, there seemed to be evidence that the MMR vaccine had some side effects. But years of scientific study revealed that the co-incidence of autism was just that… co-incidence. The problem is that the web abounds with articles purporting to be by scientists that are, in fact, just be self-important scaremongers. I have worried friends who send me this junk, which I counter with peer-reviewed scientific and academic papers that debunk the junk… not that I’m believed. I have family members sucked into the fantasy web world where know-nothing idiots convince them that black is white, often just because the government or scientific community say black is black! They seem to be ready to believe anything except the truth.

Research anything on-line and you can winkle out the truth by using your eyes, brain and experience. What you should not do is just believe what suits your view of the world and pick out whatever you see that supports it, ignoring the rest. The trouble is that our leaders talk crap, loudly, publicly and apparently with authority. It doesn’t take much nouse to see through it when what is said one day is contradicted the next. Even although Boris no longer commands a majority in the polls, there are still as many as 40% of us believing the lies, half-truths and deliberate misdirections, despite every u-turn and every late decision that costs lives. 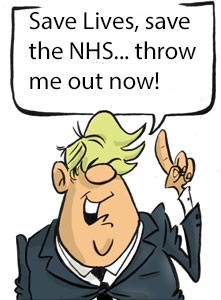 I regularly hear that flu jabs give you flu… all based on a combination of coincidence, mild symptoms or someone getting a cold. If you have ever had flu you will know just how low you can be laid and its a killer too. I’ve been having the jab every year for two decades, never had anything worse than a sore arm for a few hours!

I guarantee that the overwhelming majority of the jab refuseniks will be of an age least likely to be at danger. Just like the students who had Covid parties, they feel invulnerable anyway, and just like those students they can infect granny in a matter of minutes through their selfish attitudes. To stop this epidemic we have to kill off the virus by removing its chance to thrive in human bodies. We need to vaccinate all of us, that means six or seven billion people around the world… otherwise it will continue to be hosted and will go on mutating and killing.

Covidiot News just in from my area… Bloke from London fined when visiting a friend in Margate, later found staying at that friend’s house and fined again. House party of 30 people broken up and householders fined, the participants hugged and kissed as they left. Street crowd dispersed and fined, then fined again when they congregated again later the same evening! Couple fined who drove 50 miles out of London to pick up something they bought on eBay!