This time of year, as it gets colder and darker, we all spend more time indoors than out. It is about now when I usually indulge an old pastime for a week or two. This is often indulged further by gifts at Christmas… being this old and really not ‘needing’ anything relatives struggle to think of anything to buy us and the old favourite idea is dusted off. By the time we have created a heap of recyclable wrapping paper the urge has left and the gifts are put away to not see the light of day until late November the following year.

A day of being indisposed coincided with that time to create a ‘duvet day’ ripe for the pursuit.

Like a newbie sign-up to Netflix I binged jigsaw puzzles in the way I watched Game of Thrones, packing three series into a week’s viewing… so this is my fifth jigsaw of the winter… maybe the penultimate one until the urge dissipates. 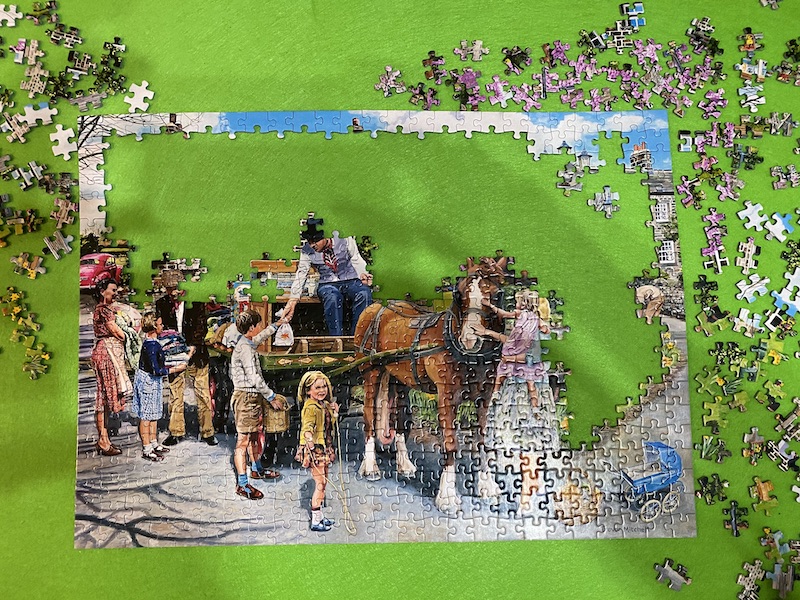 Knowing our taste we usually get scenes of days past within (just about) our living memory… just like this ‘rag and bone man’ giving out goldfish to those bringing stuff to him. We had one just like him that came down our street shouting an incomprehensible ‘ragabonnnnn ah’!

Like solving the Time’s Crossword, or cracking a Sudoku there is a great deal of satisfaction to be had completing those bland areas of a puzzle like vast skies or the all-one-colour centrepiece of a puzzle. Like those grids there is little to be gained from the end result, it’s just the ‘doing’ that one derives pleasure from!

Clearing out our store of puzzles that we’ve done at least once, we pass them on to the local food bank with some Christmas treats for kids, I wonder if any child of the last decade or so would get any pleasure for something done indoors without an electronic device? Maybe there will be a grandparent in their Christmas bubble who can tell them the history of such scenes.