Denise Goodfellow is a guide and birder in Northern Territory in Australia (better known at the ‘Top End’). She is a campaigner for indiginous people as well as for accessible and non-intrusive tourism. She was recently invited to attend the Colombian Bird festival to talk about birding tourism in the Top End.

On hearing of my invitation to speak at the Colombia Bird Festival friends warned of kidnappings and nasty diseases.  But intrigued, I googled Manizales where the event was to be held.  High in the Andes it looked a beautiful city, and there were twelve universities – it couldn’t be too dangerous!  I went; it wasn’t.

Colombia is one of Latin America’s seventeen hugely biodiverse countries, having, for a start, nearly 1900 bird species (more are being discovered as birders push into former no-go areas).  The Festival is the brainchild of Sergio Ocampo-Tobòn, the “soul” of Colombian birding, and has the support of the Government, hotel chains, and coffee-growers.

Some speakers showed slides of a spectacular variety of birds, some never seen before, and all destined to send twitchers into paroxysms.  Guto Carvalho and Horacio Matarasso spoke of the growth of birding in Brazil and Patagonia.  Others talked of conservation, an issue in South America as it is elsewhere.  But some problems are being tackled.  Andrea Ferreira, Sustainable Tourism Coordinator for a Paraguayan NGO, mentioned that cattle in her country are moved around to allow the pampas to recover as bird habitat.  Her organization is also helping farmers improve roads and vehicles so that they can host visitors to their country.

One of two intercontinental speakers, I spoke of birds in Australia’s Top End, the threats they face – destructive fires, weeds, and sea level rise – and the challenges in dealing with such issues.  For example indigenous rangers and white bureaucracy have an uneasy fit, and several of our most experienced have resigned, leaving parks to the mercy of rampant weeds that can transform species-rich habitats to monotypic grasslands.

Uttej Rao of Gujarat, India told us that there it is considered a sin to kill birds and so they are unafraid of humans.  Would that were the case elsewhere in the world – who could forget American author Jonathon Franzen’s exposé of the trapping of songbirds in Cyprus (The New Yorker, July 26, 2010)?

One unforgettable speaker was Juan Pablo Culasso.  Blind since birth, he demonstrated his phenomenal skills at identifying bird song.  He works with birders all around the world; see Nature’s Sound Map

Unfortunately, there was little time for birdwatching in the beautiful gardens of the Recinto del Pensamiento, where the Festival was held.  Still, between sessions I spotted American Bustard, Southern Lapwing, White-collared Swift, Rufous-collared Sparrow, Pale-edged Flycatcher, Great Thrush, and White-sided Flowerpiercer, and others of the sixty or so species recorded in the grounds. 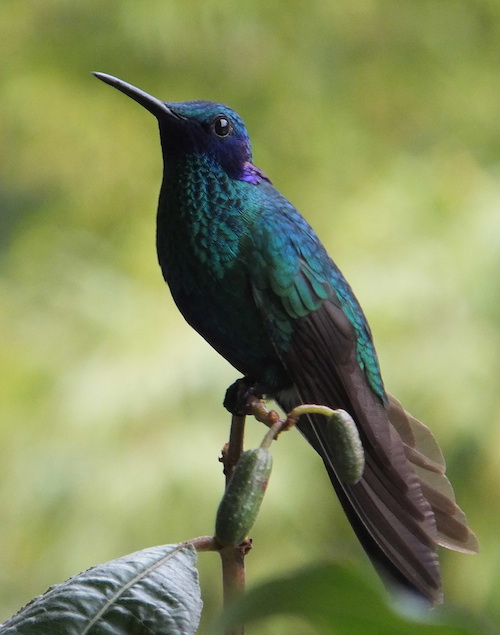 On my last day I walked to a little house set in a clearing (see photo below).  Glittering streaks of emerald, garnet, peridot, and amethyst buzzed around the red plastic bird feeders and potted purple-pink fuchsias on the porch -hummingbirds with the evocative names of Sparkling Violetear (see photo above), Woodstar, Bronzy Inca and Amazilia tzacatl.  Hopping around the potted shrubs was White-sided Flowerpiercer, a fascinating little black bird with an upturned beak. 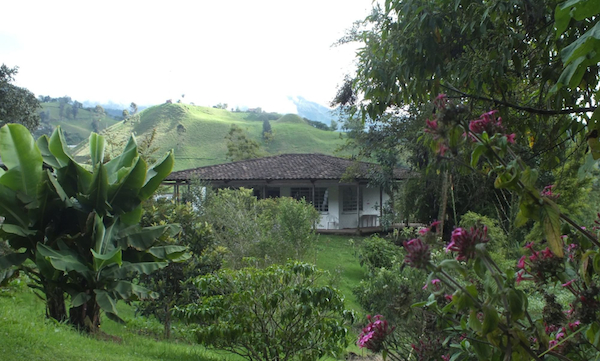 Returning through the rainforest I spotted familiar-looking plants, reminding me of Australia’s Gondwanan links.  One large purple flowered shrub, Tibouchina urvilleana,was obviously a member of the Melastomataceae, a family present in the Top End of Australia.  A tiny chrome-yellow fungus on a rotting log resembled Dacryopinax spathularia, also found in the Top End and most likely related, according to one authority.  I almost felt at home.

I thought this would be a difficult trip, and not for the reasons my friends feared; but because I didn’t speak Spanish.  Yet again and again strangers came to my aid.  I saw some new birds, some beautiful beyond description.  I made new friends and encountered the kindness of strangers.  I loved the country and if I’ve a choice, I’ll be back and hopefully some of my friends will accompany me.

My thanks to Andrew Haffenden, Sergio Ocampo-Tobòn, Natalia and Claudia of COTELCO, and the Colombian Government for making this trip possible.