The sound track of lockdown for me, and I suspect many others has been the song of the Blackbird. His melody has raised my spirits daily and no doubt upped my endorphins or whatever happens when nature gives you pure joy. A call of nature at 3.38am led me to be resting my head on the bathroom windowsill to hear his ridiculously early serenade; and as darkness has finally fallen and I’ve zipped up the cover on our mini greenhouse and checked on the antics of the frogs in our pond, he has sung me off to bed. Mind you, as my better half has pointed out he spends all his time singing when his missus is feeding the kids and tending the nest! 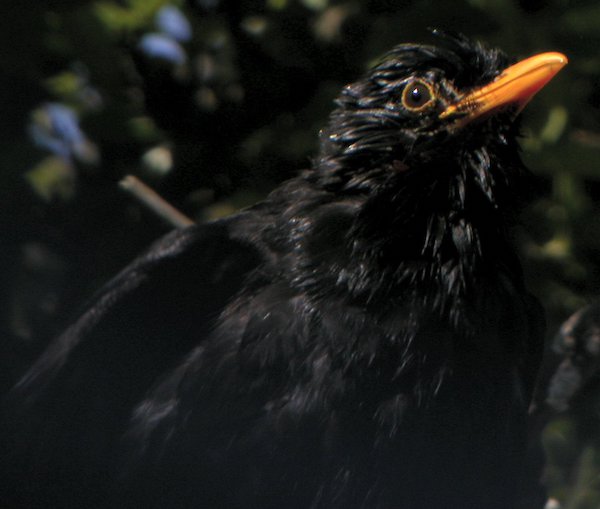 Deaf in one ear, and half deaf in the other my hearing aid modulates sound so that, for the first time in a couple of decades I now hear the Goldfinches twittering above me on the telephone wires, or the Goldcrests flitting around the hawthorns. My days have been spent trying to photograph and ID the bees and flies in my garden and to capture the beauty of the garden flowers. I recall, almost half a century ago being in a theatre and hearing the mind penetrating trills of a soprano chorus so exquisitely beautiful my eyes ran as my ears rung with their sweet notes. Just being among plants and insects, birdsong and the plopping of frogs into water can similarly overwhelm me with wonder and gratitude for life in all its diversity.

That a black man cannot watch birds in a public park without drawing the attention of a bigot whose selfish, ‘entitled’ actions could have led to his arrest or censure, is shameful. That those enforcing the law should use it to justify their brutality and racism condemns us all if we pass by or choose to ignore or defend their truly inhumane actions.

But we cannot condemn far off offences and the ingrained prejudice of other cultures while our society conceals the truth from and of itself. Systemic racism is behind the lack of diversity among British nature lovers.

A few decades back sexism froze out the majority of women from birdwatching circles. Women were not shunned openly, but made to feel unworthy, ignorant outsiders. Laddish twitching at one end of the birding spectrum and patronising elitism at the other, excluded half the population from the pastime, unless women were prepared to act as stupidly as men. Heterosexist birders made other orientations illegitimate until the gay community gained the armour of association so they could bird with pride.

Currently, those with physical disadvantages are having to push hard against the exclusion afforded by inadequate and unnecessarily uniform provision, whether it is impassable paths or physically inflexible bird hides.

Lockdown they say has raised everyone’s awareness of nature as solace, nature as healer and nature as the saviour of our collective sanity. Confined to our urban gardens or high-rise concrete blocks we pined for the great outdoors and as rules eased we rushed out into the hills and woods and metaphorically rolled in the meadows.

My hope is that in this great re-connection with nature people of colour feel just as entitled. Nature is not a club just for the white middle-aged and middle class. Its benefits and beauty are there for us all, and every one of us deserves its bounty.

Rant it out!
This entry was posted in Latest GOB Articles. Bookmark the permalink.