(This article first appeared in the August 2012 edition of ‘Birdwatching’)

What is listing all about?

A recent ‘listing’ debate on my county internet mailing group was prompted by my revelation that a flyover Lapwing had taken my garden list to 50. Of course, this is pretty poor for watching a coastal county garden for a dozen years until you realize that mine is a patch of patio pots plus a pond in a tiny scrap of urban concrete. My ‘garden’ would, in my youth, have been called a yard – an enclosed outside area too small and shabby to be graced with the title of garden. However, ‘yard’ for our transatlantic cousins, simply means your garden be it a quarter acre or ten hectares.

When I moved into my bungalow most of this small outside space was crazy paving. Just one very narrow border and a pond with a rockery grew anything. Half of the space was taken up by our garage roof, which is sunk into the space slightly downhill from the house. We fenced this in, tiled it and started to cover it with large pots of shrubs and flowers. Over the last decade we have enlarged the pond and pulled up as much of the paving as we can so that it is a pretty space the size of a large sitting room and jam-packed with plants.

We also have a birdbath, trays, a dozen hanging feeders and fat-balls; so, despite its size it is an important feeding station (thanks to Jacobi Jayne) in the winter.

It has taken nearly twelve years to build up the number and variety of bird species from the Feral Pigeons and House Sparrows that we inherited. Sadly, there is half the number of House Sparrows now, never more than six together. But we have had 25 goldfinches vying for the feeders all at once, as many as 20 Collar Doves, and good numbers of Blackbirds, Starlings, Robins and other common garden birds too. Probably around thirty species have visited including those that have been red-letter days for me when such as Redwing, Brambling and Siskin have turned up.

A few species would be the envy of many people with ‘proper’ gardens – like when Maggie spotted four White Storks circling high above the town one hot day when she was sunbathing. Last week, after a lot of snow, Ring-necked Parakeets were at our peanuts and not for the first time.

On another Autumn day we had no less than 5 Firecrests all at once – pretty good seeing that, in 12 years we have had just one Goldcrest! A few years back a tristis race Chiffchaff stayed in my yard for three months making a living from my patio pots and even once sitting two feet from my nose on the office window ledge.

But in all those years I’ve never had a woodpecker, nuthatch or redpoll and only once have we played host to some Long-tailed Tits. Last spring we added another level to the house by converting the loft – from my new office window I can now look down a valley, albeit urban, that is used by migrants so flocks of Fieldfares poured through last autumn – I am hoping from great things now that I have a view.

Of course, watching your garden is something any birder takes for granted and I would be very surprised by any birder who could not remember whether any particular species had turned up in their back yard regardless of whether they keep a list.

And this is how the debate went – wasn’t it good enough to just enjoy what you see, surely listing is just a nerdy activity for the sad anoraks of the birding fraternity?

It is brilliant for me, just for once, to straddle this particular fence.

I really do not feel that strongly about listing as an issue. I keep a garden list, a county list, a UK list and a World List. Whenever I visit another country I create a new list. This practice was defended by some of the mailing group as an aide memoire. This may be true for a minority, but if you are as obsessed with birds as me, then you too will remember every new bird you have seen and where you saw it. Even on those days when the senior moments crowd out memories of anniversaries, what day of the week it I, or even your own name I could still tell you what II saw on a day out in Malaysia two decades ago!

A few people in the group defended listing as a useful tool for measuring the changes in avifauna abundance over time, or some other high blown scientific reason – which I don’t really buy either. Yes there is a point to wader or wildfowl counts or the constant monitoring of particular sites, but that really is a different activity.

Listing was definitely under attack – saddos who can’t see the wood for the trees.

Anal-retentive activity or what?

I leave it to you to decide but, for myself, I don’t really care.

Listing seems to me to be almost hard-wired into the human (or at least male) psyche. I see no harm in it, even when the lists are plain daft like ‘bog birds’ (those seen from your own or any lavatory), or TV lists – birds seen on telly that are incidental to the programme. Mind you, I admit that it was fun one year to compete with a US friend. He saw what he could spot at the Open Golf in Sandwich, and I tried to see what I could spot at the Masters in Augusta (he won by a mile although there were far more birds in Georgia, he managed to ID every song he heard, my tin-ear dipped on them all).

My lists are for my enjoyment, especially on a dark November night when I am going through my world list trying to re-arrange it in line with current taxonomy. I have to say that I do not like competitive listing – for a few years three friends and I regularly compared year lists and I found being in competition, win or lose, actually diminished the joy.

After this discourse you have probably guessed where I was today – out trying to build my year list. I got off to a good start this year getting 100 ticked off before the end of January compared to my total of 150 for the whole of 2011! (I really, really must get out more).

Then the weather and consequent arthritic upsurge intervened. Today was my first non-shopping outing in over a week, but all I managed was to add Skylark for the year – a nice flock of twenty, grubbing through cow churned mud at a spot where I usually see corn buntings.

Why year list? Well, for me it’s a nice focus and hones up ID skills and revitalizes the inherent beauty of even the most mundane birds.

Maggie enjoys the ‘hunting’ aspect of it too. She says it turns the everyday into the ‘stonking’. On December 31st she says, its just another Chaffinch, but see one on January 1st and you can punch the air in triumph. 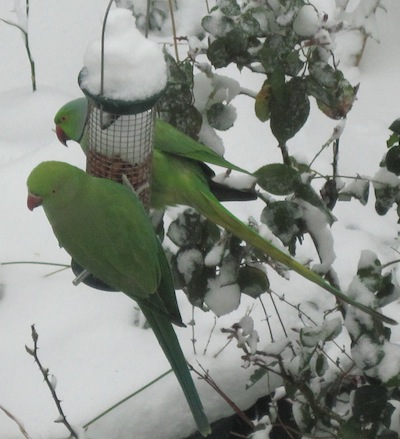