The End of Days

(This article first appeared in the December 2013 edition of ‘Birdwatching’)

In the Bahman Yasht, the book of the oldest monotheistic religion – Zoroastrianism, the end of days is…

…a time when the sun is more unseen and more spotted; the year, month, and day are shorter; and the earth is more barren; and the crops will not yield the seed. And men become more deceitful and more given to vile practices. They will have no gratitude. Honorable wealth will proceed to those of perverted faith. And a dark cloud makes the whole sky night, and it will rain more noxious creatures than water.

That’s a bit dark, even for me, but I won’t pretend that I will not be happy to see the back of 2013. For reasons unrelated to birding, this has been my worst ever year.

It has also been one during which I have not birded overseas and, since I began recording these things, I’ve clocked up one of my poorest year lists too.

When I was in my twitching salad days (can salad twitch?) December would have been a month for trying to catch up on the winter specialties that I dipped out on back in January or February. To be honest it’s been a while since I bothered with that.

Oddly, at dawn on 1st of January I know I will not only be reinvigorated and determined to clock up my longest year list ever, but also listing will seem important again. For how long I don’t know as every year the will to list and the enthusiasm to chase rare birds seems to diminish. This year it had gone by March, who knows, next year it could end before January is out.

Don’t mistake this for a lack of enthusiasm for birds or birding. I am still obsessed and still love to see birds that cannot be classed as ‘every day’… but the urgency has gone to drive eighty miles to see a willow tit just because I haven’t seen one since last year.

It’s also less important to see birds in the UK that I’ve not seen here before, especially if I’ve seen them elsewhere. I still haven’t made it to 400 UK species, and, you know what? I don’t care any more. This year it was a thrill to get to 300 for my county with the help of the cemetery thrush… a twitch that took me to the very edge of town, nearly two miles from my door. Truth is I am not sure I would have bothered had it not been a world lifer at the same time. To see something in the natural world that you’ve never seen is always worth some effort. Nothing can be more satisfying than seeing a bird on your own turf that ticks all the boxes for county, country and world.

Having said that, observing behavior that you’ve never witnessed before can be much more enjoyable, no matter how prosaic the species.

I’ve been lucky enough to travel and have seen around two and a half thousand bird species worldwide and think that I can probably tell you the exact place and circumstances of my first sighting for most of them. In a few cases, of some longed for or iconic species, I can probably tell you the second time… I don’t think a third viewing of any species is etched on my brain ‘though.

On the other hand I can tell you about every time I’ve heard a starling ‘murmuration’, seen a peregrine stoop or harriers pass food from mate to mate.

The older I get the more incredible the wild world seems to me, not just in its incredible variety, but also how the jigsaw all fits together to make a stunning and literally awesome picture.

The older I get the more I am fearful that we are witnessing the end of days for this richness. As people take up ever more space and take more from and give less space to nature, it sometimes feels as if the apocalypse that is foretold by so many religions is just around the corner.

As I drove through town today, taking an unfamiliar route to the sea in the hope of a loafing diver or passing gannet I was struck by the old and new houses I drove by. Here and there are flint-walled cottages isolated among a sea of bungalows and Elizabethan buildings surrounded by modern flats. I let my minds eye filter our anything built since the First World War, it left me with a few cottages and churches among the fields, orchards and untilled land.

Perhaps it’s just me feeling like this because it’s December… …when the days are shorter; and the earth is more barren; and the crops will not yield their seed for months to come.

I took this picture (I really, REALLY did) out while birding this foggy December morning… perhaps I should get out more after all! 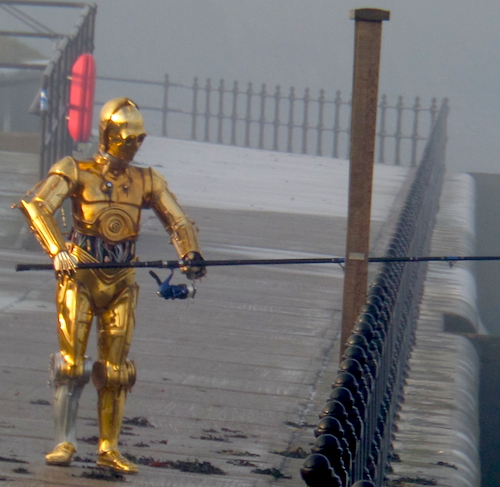