Cornwall Beaver Project, supported by the Beaver Trust*, like the rest of the world, has been in  lockdown for months now, but as in so much of life there are all sorts of nuances to think about. Of course, the beavers themselves couldn’t give a damn about our affairs and state of health. They are way too preoccupied with the important stuff that beavers have to do rain or shine, summer and winter, plus a few seasonal specialities to boot.

So, their day to day month stuff revolves around lots of feeding (their diet is pretty low in nutrient value so they need to eat a lot!) They are incredibly generalist herbivores eating just about anything that grows in their habitat. Tree bark, brambles, grasses, herbs, water lilies, reeds, ferns, just about anything. It would be much easier to write a list of what they don’t eat, but they definitely have favourites. So far as trees go poplars, willows and maples are of very great interest, but point to note, they never eat the wood, just the bark.

Besides feeding they also spend a good deal of time grooming (fur needs a lot of attention if it is to stay in good condition).  And of course, they have a lot of dam and lodge construction to keep up with. Counter intuitively the very dry period of March through to the end of May really suited them, drought conditions mean that stream flow is down, currents are weaker and the beavers find it easier to build and thus store water. This paradox has implications for farmers – in 2018 we had water we could pump out onto pasture which would otherwise have not had. And at a time when dead fish were being pulled out of rivers across the southwest, our stream remained healthy and with sufficient water to keep its range of wildlife in good condition.

But back to lockdown – this has coincided with the late pregnancy of our breeding female. Beavers mate in winter, and have gestation of about 105 days. A romantic encounter on New Year’s Day (they do not drink so no hangover worries that day) will result in kits being born on or about the 15th of April. I happened to be walking past the lodge on the 1st of May and heard the unmistakable sound of mewing kits from within, a heavenly sound. A month later they were starting to venture out and take short swims, and a month after that they are swimming up and down the length of the lodge pond, and making themselves very much at home. Having the kits means that we are getting a lot of great sightings of Mum in the early evening. She is leaving the kits tucked up in the lodge to go foraging at around 5.00pm, when, incidentally, Dad and last year’s kits are also sleeping. She is making the most of a quiet time of day and for the careful observer there are fabulous views, and great pictures to be taken.

So, for us here on the farm the lockdown has bizarrely resulted in paying a lot of attention to the Beaver Project. There has been time to stop and stare, and listen and smell. And time to do some long overdue maintenance of the fence, and build new bridges – built very much on the pattern of WW1 duckboards. We actually used up a pile of shuttering boards remaining from concreting our drive last year. Although I say it myself, they are serviceable and stable, if not very beautiful. But the biggest and most diagnostic thing about the lockdown has been the interface with the filmmaker Nina Constable working on her Wild World Series of magazine programmes, and following that the hosting of Springwatch. 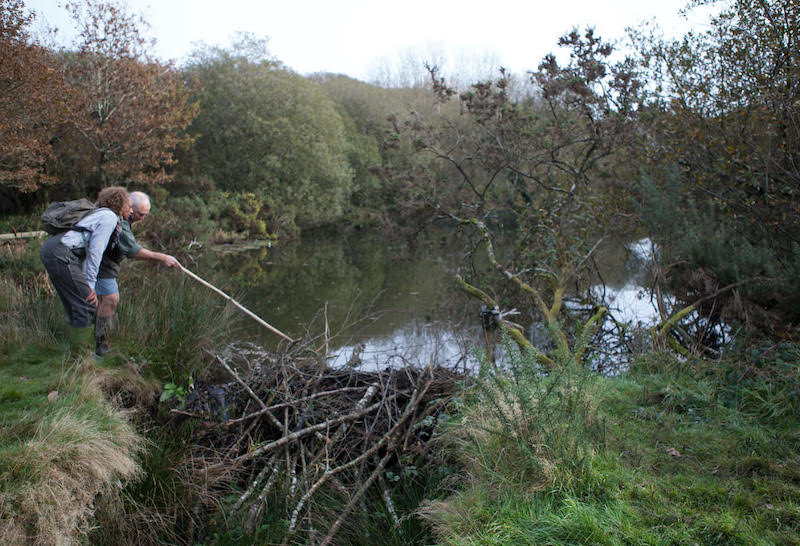 Gillian Burke of Springwatch has been a friend of the project for a number of years – she visited in 2017 with Autumnwatch first, then came back gathering material for BBC Wildlife Magazine article, and has since been over a few times beaver watching. When Springwatch decided that the programme this year would be made demonstrating social distancing it meant that the various presenters remained within their home areas and the filming was done by crews normally resident in those areas.  It was brilliant for Cornwall Wildlife Trust, the project and for Beaver Trust, as there were 12 primetime episodes featuring beavers (often live) to a live audience of 2-3million plus viewers. This had a very positive effect on our profile but also did a lot of myth busting and fact sharing about the animals. While my direct involvement was very little I made sure to see everyone once or twice a day and help where needed with filming opportunities. My daughter Felicity worked a great deal harder than me as she was in charge of catering and accommodation.

And finally, although we have been completely shut down to our normal business and school and college visits there has been a trickle of researchers coming to visit the site to gather data and work on their own projects. This might have been stretching the rules a little, but for me beaver work is essential work and a killing virus shouldn’t get in the way if we can avoid it. Having the time to stand and stare has been a gift, no traffic noise, no aircraft, and our birds going mad. Two very unwelcome things to report on the bird front though, our normal farm complement of 30 odd pairs of swallows failed to show (at this time I have seen just one pair nesting in a shed) and there have been no sightings at all of any spotted flycatchers. This has been the cause of real sadness on our part. A very slight recompense was the sighting of a firecrest by one of our student visitors last month.

*The Beaver Trust is a new  wildlife charity, whose aim is to rebuild the ecological integrity of Britain’s rivers, by the urgent return of this extraordinary mammal to headwaters across England, Scotland and Wales. Our role is convening the stake holders, engaging communities and communicating the art and science of beavers and our aquatic habitats.