…as promised the second part of our birding outing that was better for fungi. What is, to me, most astonishing, is that a week before we had walked around The Elms looking for fungi and found none at all. How is it that we went looking for birds and came across hundreds of a number of different species. I guess part of the answer is that fungi fruiting bodies do not last very long (with the exception of some brackets). Fungi were considered magical because they appeared out of nowhere, were there today and gone tomorrow. Shakespeare wrote:

Elves… …by moonshine do the green, sour ringlets make,
Whereof the ewe not bites; and you whose pastime
Is to make midnight mushrumps

So maybe the Elves had come off their furlough and were busy scattering their fairy dust. Anyway, the first found fungi was new to me.

It wasn’t until I was cropping the photo to add to this BLOG that I noticed I’d also captured a tiny fly… I can’t hope to identify that, so I dub if Fungi Fly.

Whether you are brave enough to collect fungi to eat or not there is, generally, no harm (to the fungi) in picking them. It is no more destructive than collecting blackberries or damsons. The fruit exist to spread the spores and disperse the fungi.

Apart from the slime mould, Maggie’s favourite find of the day were these diminutive white fungi. The piece of wood they are on is no more than three inches long, despite her wanting to take them home we carefully put them back where we found them. 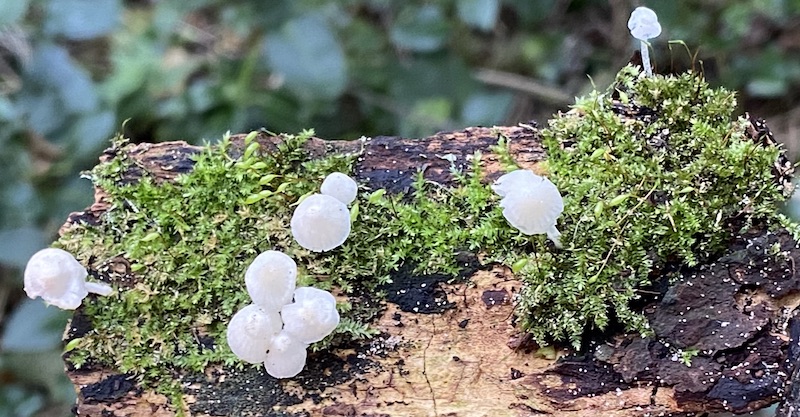 I didn’t recognise the fungi below as a close and edible relative of the field mushroom… the rather brown top fooled me, not that I would have the courage to forage.

I think that we humans find ephemera magical because we judge everything by our own mind set. Our perspective is generational or, at best, seasonal. Years roll by and are marked with anniversaries, life changing events and world history. We remember significant events like marriages and births. Our minds construct the world around us that way, so we remember our childhood classmates or who was at our wedding but can’t remember if we turned on the burglar alarm of whether we had marmite or marmalade with our morning toast. We do not notice our physical changes happening over seconds, minutes, hours, days, weeks and months and are suddenly surprised by those changes.

Yesterday I caught sight  of the skin on the inner side of my forearm. I was shocked as I saw old man’s skin! The back of my hand is an off centre chequer-board of marks, veins and sinews and is my fathers hand, or my grandfather’s, not the firm flesh of youth. Suddenly, a gale blows and the cold rain reminds us that it is Autumn and our heads go up to see the wonderful Autumnal colours of the leaves having not noticed their gradual change.

Some people’s attitudes harden and others mellow with age. I hope I am the latter, but I find myself angrier than ever at those things I have spent my life fighting for or against. Racism still shames us, poverty and privilege are mercilessly maintained, and humans continue to destroy the natural world. Perhaps, if we could all appreciate the minutia and daily changes we could build on them or fight against them instead of which we mostly believe that ‘nothing ever changes’. So long as we believe that it won’t! But if you wake up and see the fungi you will know life is ever-changing; our mission is to steer change in the right direction.