I tend not to go birding on Sundays as the parks and reserves we visit tend to be busiest then, with people whose weekdays are in bondage to The Man! But, it’s Global Birding Weekend and we wanted to participate. It was bound to be frustrating because a ‘mega’ sits on the doorstep. A Masked Shrike (5th ever for the UK and first for Kent) turned up just a couple of miles out of town. Given it is half a kilometre from the nearest parking it would be out of my range in normal times, but at a Mega twitch all the parking would be filled for at least that far again.

We decided to take a look at Sandwich including New Downs as there have been a lot of good migrants over the last couple of days. Just for the record the list below is what we saw, including an obliging Robin literally less than a foot away (my foot). 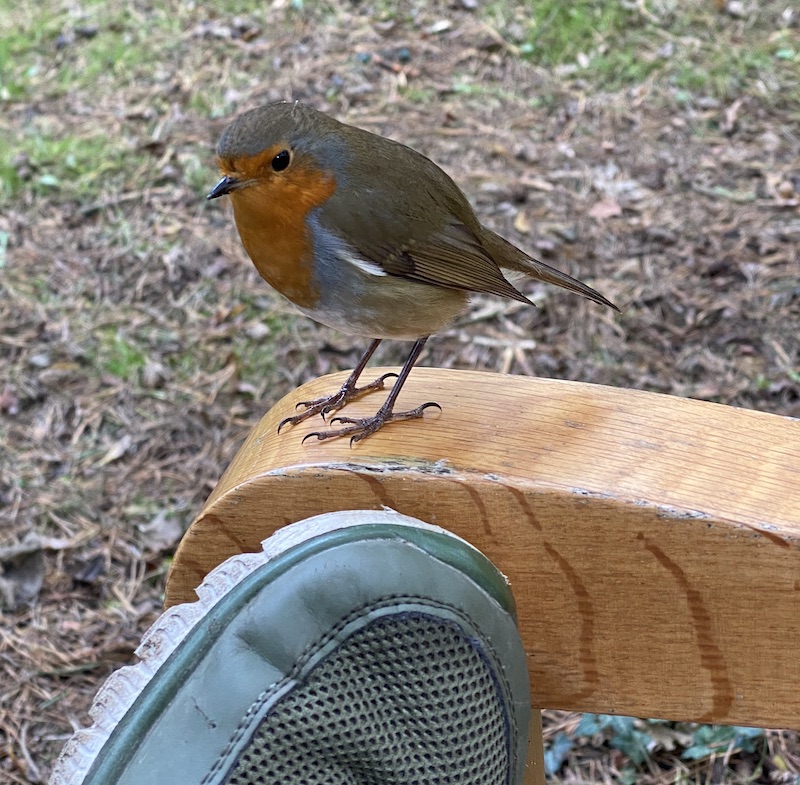 A Common Buzzard landed on the sand extraction place 20 yards from us but flew off as I fumble my camera phone… later when we returned to the spot so did the buzzard, but I still managed to fumble my phone. There were loads of stonechats about, maybe a dozen individuals. The Elms was alive with Goldcrests but we saw no Firecrests. However, we were entertained by pristine Lesser Redpolls.

As is often the case when looking for one thing (birds) you stumble across others (fungi) and today was no exception. We added at least three ‘lifer’ fungi in the Elms, despite having not seen ANY there a week ago! More of that in tomorrow’s BLOG. Among them lurked another extraordinary creature that we thought was a fungi yet turned out to be a so-called ‘slime mould’. This was not just a lifer species or even family but a whole phylogenetic ‘order’. Slime moulds are not animals, plants or fungi but stranger than fiction as they are like fungi that can move around!

We didn’t pick up on any of the really special birds but did see two unidentified raptors flying over Sandwich towards Deal. A large bird was being mobbed by a smaller one. The latter had a pale head and looked around Buzzard size. The larger bird had long, wide wings that were held more or less flat. They were both high up and I could not relocate them when I jumped out of the car and set up my scope.