Coasting or on the Rocks? 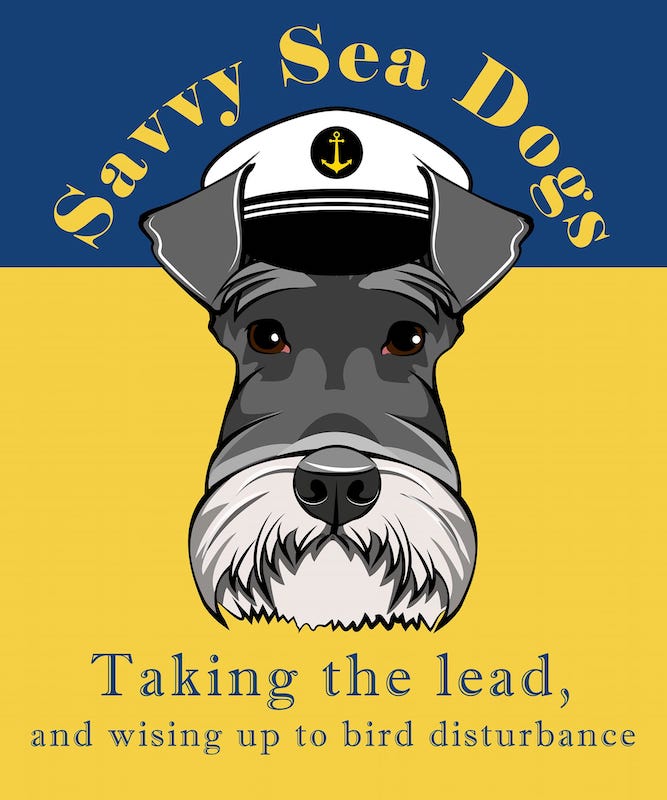 I live in a well-known seaside town which has recently shrugged off its reliance on Del Boy day-trippers, to replace that with an increasing investment in middle England tourism. Kiss-me-quick hat shops and jellied-eel stalls are going, while galleries and posh restaurants are on the up. Nevertheless, 95% of visitors still enjoy the golden sands, ‘blue flag’ beaches and rock pools. In the ‘season’ they may have to dodge the odd kamikaze gull but they can do this safe from the perils of dog poo or snarling Schnauzers. Dog are banned from the beaches while the visitors are here.

But when most visitors have scuttled back to the city, locals are free the disturb my appreciation of waders by allowing their dogs to bark at the blackbacks and terrorise the turnstones. Notwithstanding the miles of wide and well-looked-after promenades that connect most bays, most dog walkers must let their mutts tear along the tideline. Yesterday I was scoping the sea from the seawall and looked along a kilometre of strand. There was a dog every 50 or sixty meters, sometimes as many as half a dozen pooches released from their professional dogwalker leads to chase around letting of steam and ensuring that steam issued from my ears too.

If this was a deserted highland beach with a lone dog-owner then only the hundred meters or so currently scampered across by their pet would be disturbed. As they disappeared over the horizon gulls would settle back in the sand and sanderlings would again race the tide. But here in the overcrowded and urban southeast there is not a league of beach to each Labrador, but a continuous pet-stream, a legion of walkers sweeping the beach clear of birds from dawn to dusk.

Wildfowl and wader counts show a year on year decline in breeding, roosting and feeding birds along our shores. Birds we have taken for granted like curlew and turnstones, golden plovers and oystercatchers are pushed further and further from what they need to survive, feeding mud flats, foraging rock pools, nesting sites and places to roost away from predators.

Green-minded, animal loving residents in my town will no doubt be pledging their pennies to conservation to save reserves and breeding habitat of these very same species. But I doubt one in ten has a clue that their daily constitutional with Rover is driving local birds to exhaustion and starvation.

We lucky coastal dwellers, can paddle in the sun and smell the bracing ozone and watch the crashing waves. We don’t even realise that the whistles and calls of waders and beach birds are disappearing daily.

Until recently, there was a haven stretching for miles along my coast. A sandbank is exposed for half the day where you can see hundreds of cormorants stretch out their wings to dry, common seals hauling themselves up to rest and pup, and thousands of gulls and waders evading thoughtless pet lovers. Yet, despite all appeals and advice, commerce has trumped conservation and the sand bank is to be pilfered for building sand.

Even our local nature reserve is no better off and needs ‘policing’ to stop selfish dog owners letting loose hounds across its tidal flats.

There are many bays along our urban coasts, surely, we can set aside a few as havens? Happily, the least attractive to us, with steep shores and stinking seaweed, are the perfect choice for Purple Plovers.

I’m nagging my local politicians to make a stand and cut off a few coves for wildlife. Every other coastal-dwelling birder should be doing the same.