Remember the Rio dictum; think global, act local? Well, something is happening near me that could affect much of Europe, given the importance of the UK’s coastal areas for wintering waders in particular.

In my lack of the woods a great initiative taking place that needs a sea change in our understanding and habits. So far as I know it’s currently confined to two projects in my county, but I really hope it becomes nationwide.

Bird Wise is the collective name for the two Strategic Access Management and Monitoring Schemes (SAMMS), partnerships of local authorities, developers and environmental organisations, one in North Kent and its equivalent in East Kent. The projects’ remit is to combat the disturbance of over-wintering birds because, when frightened they stop resting or feeding and expend crucial energy flying further away. Lack of rest and feeding in winter also leads to less successful breeding in the spring. Obviously, the threat to breeding birds is just as great with nests abandoned with eggs or chicks predated. 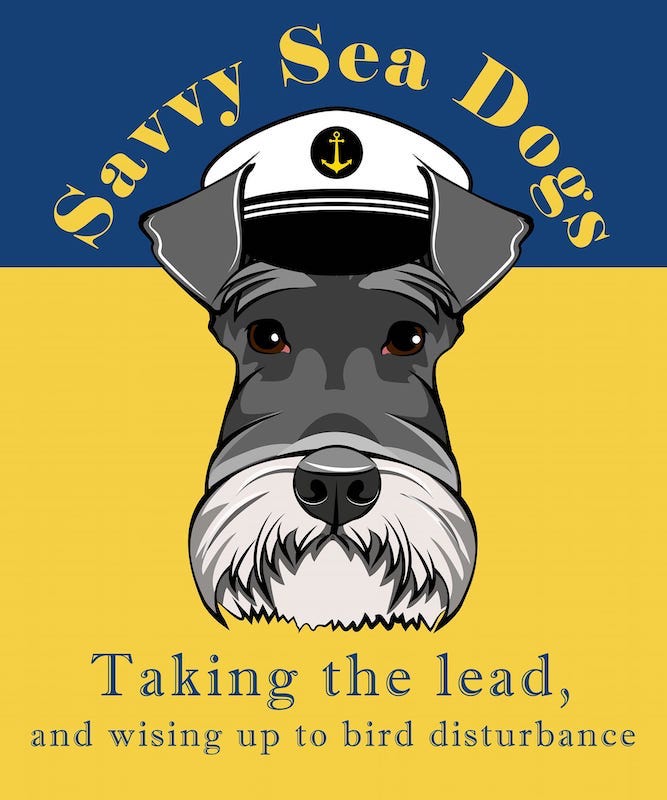 No doubt our physical and mental wellness is much enhanced by a walk by the sea, but what is good for us can be bad for birds. Disturbance can be down to a number of activities such as bait-digging, wind-surfing and walking the tide line. However, the biggest threats are dogs off the lead. Bird Wise isn’t about stopping people enjoying the coast but about encouraging better behaviour where needed. I’ve never understood why people want to walk right at the edge of the water or allow their dogs to race about where the birds are. But rather than irascible old blokes like me waving our walking sticks at dog owners, Bird Wise seeks to educate and encourage a new code of conduct on land and sea.

The details are on their website but I‘d like to see it firmly embedded in the country code and backed up with signage and wardening.

None of it is rocket surgery. It should be obvious that one should keep a good distance from feeding and roosting birds and keep to paths on the landward side of the seawall and to follow signboards. Obviously, keeping your dog on a lead, only exercising it well away from birds is paramount. Boaters and surfers need to be just as aware to stay at least 100m from feeding and roosting birds.

You might assume this is just me being my usual grumpy old self, worrying at a bone because of habitually having a dog in my bonnet. Well there is that of course. However, sadly, the facts speak for themselves. A friend just sent me the WeBs counts for my bit of coast, comparing this January with 1992. Sanderling down by a third, Curlew halved and Redshank and Ring Plover down 80%. Turnstones and Purple Sandpipers down over 90%. Grey Plovers, Dunlin and Oystercatcher had healthy numbers and have now disappeared completely! If you are not shocked you should be.

Moreover, every time I have visited the local National Nature Reserve covering a land spit and mudflats there have been people ignoring all pleas and disturbing the birds from dog owners letting their mutts chase the waders to walkers and bait-diggers ignoring the signs and wandering on the mud. Anglers, who traipse across hundreds of yards of feeding grounds to stand on the tideline are often out-performed by windsurfers putting thousands of wildfowl and waders to flight and ignorant boaters trying to get nose to nose with hauled-out seals.

Its time for dog-walkers, wind surfers, bait-diggers and the rest to get Bird Wise!