According to my bee-friend these are a Lasioglossum species. Probably the Slender Mining Bee (alternative more used name below) but there are a number of similar species. I favour this one because it is the commonest and most widespread in the UK… when in doubt plump for the common ones. In fact, it is common throughout its range across Europe and northern Asia to Japan. It’s about from early Spring to late Autumn. Moreover, it particularly likes the daisy family of flowering plants where it collects pollen and nectar. They can be solitary but otherwise have a small worker group of half a dozen or so workers that may be produced twice in a season. As the alternative name implies they nest in short turf, excavating a short burrow where the comb-like nest is built. 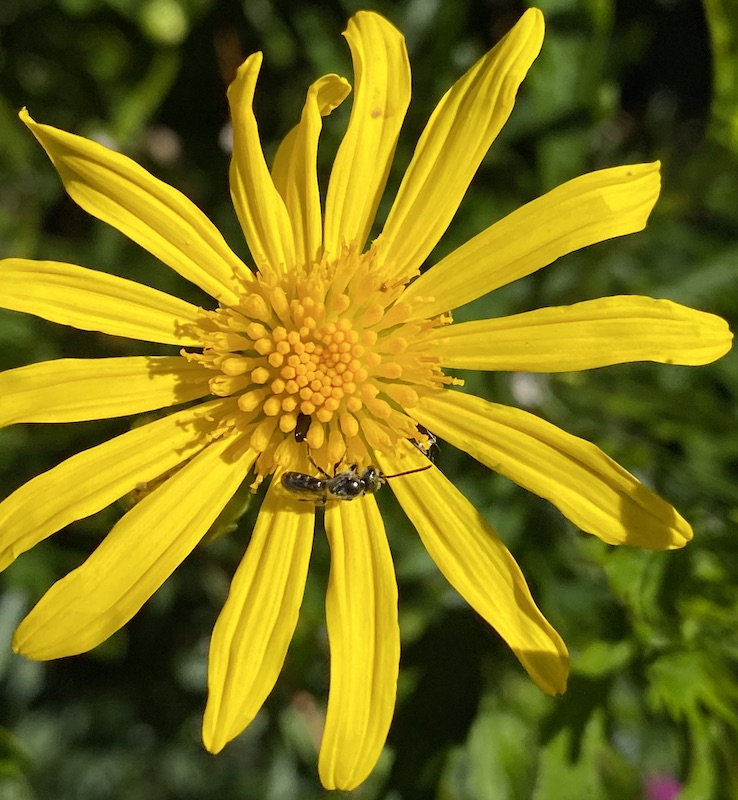 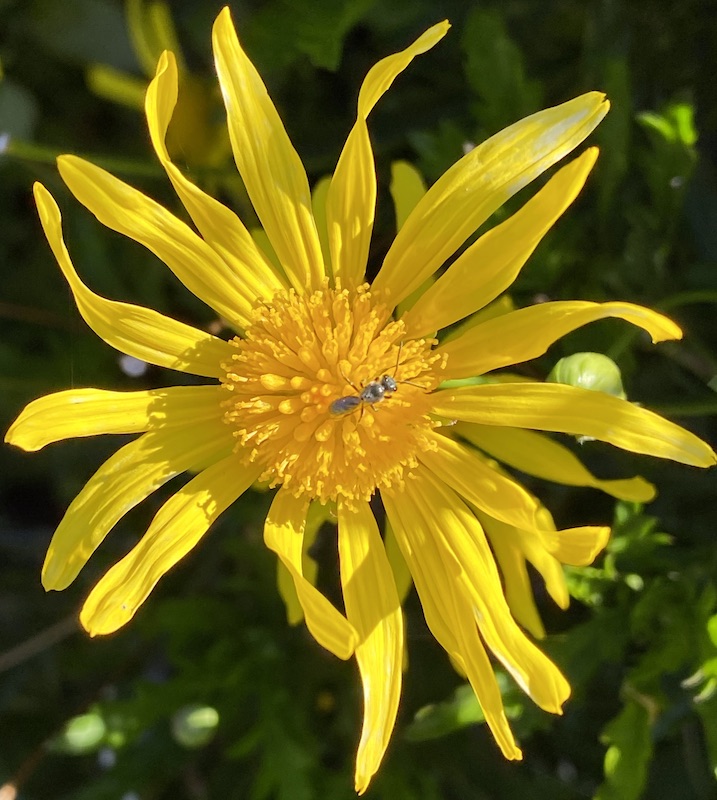 Watering the garden this morning before the temperature rose I disturbed a number of frogs… which I usually do. This year there seem to be even more than last year which was a bumper one too. It suddenly struck me why there are more frogs and they inhabit more bits of my little oasis. It’s all down to accidental greening.

Like most gardeners; indeed, like most British people, I have a sense of tidiness. This may well have been born back in the days of Capability Brown who landscaped the estates of the wealthy ‘idealising’ the countryside into parkland with carefully placed ‘specimen’ trees, lakes and woodland. Natural meadows and scrub were torn up and chocolate box vistas were born.

Last century we championed the garden as a manicured lawn surrounded by flower borders. Despite some people favouring the cottage garden with its fruit and veg patch and densely planted flowers, this model held sway until the madness of decking took hold. Every TV channel had a programme with ‘designers’ creating the same things over and over… decked patios, lawns, borders and a compulsory ‘water feature’. Capability Brown writ small for the lower middle-classes.

My own patch was 85% concrete when we moved here with a rockery and pond. Given shallow pockets and only a thin layer of soil on chalk we could not rip everything up and import tons of soil so went for digging up a bit, scrapping the rockery, expanding the pond and putting containers on ever inch we could. We created a patio on the garage roof and turned our side ‘alley’ into a green lane. 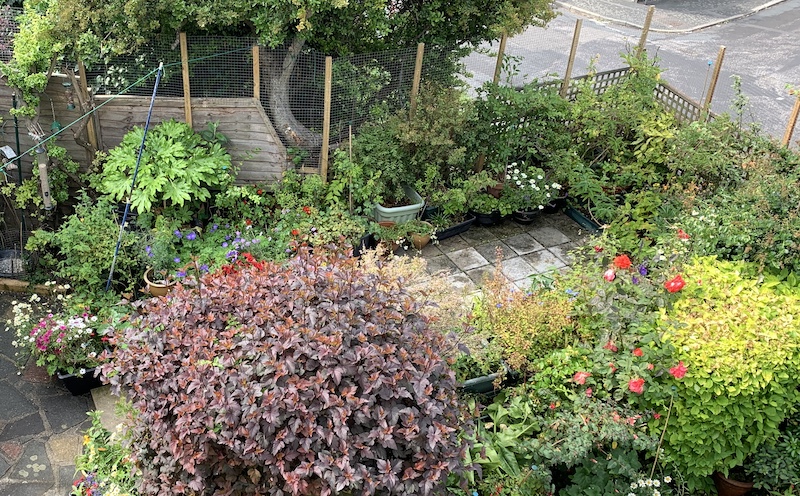 We then spent a decade or so cramming more pots in (Maggie counted them yesterday, there are 289!). All very well, but, given my innate tidiness, every early spring I would weed the pots and pull them out clearing away winter’s accumulated detritus; leaves, twigs, dead snails, spilt soil and all. Every Autumn I would have a tidy up, cutting away the dead stuff, nabbing weeds and sweeping up. My ever-expanding arthritis has prevented me doing this for two springs running. Now I realise what a good thing that is! 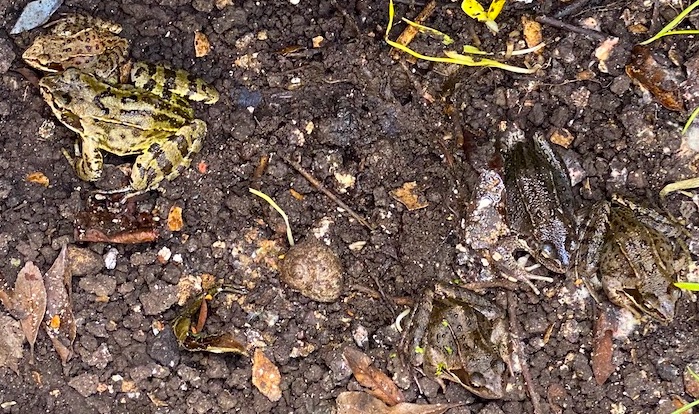 The shed leaves et al are actually the stuff of compost. Leaf litter is home to invertebrates like slugs, beetles, worms and insects and that makes it very much more frog-friendly.

I will still check the pots in Spring and Autumn and remove the most invasive and least wildlife friendly ‘weeds’, remove the build up of dead leaves from pots if they will trap too much winter wet and clear the dead stalks of perennials to make way for the next year’s growth. The rest I’ll leave for the kingdom of frogs. 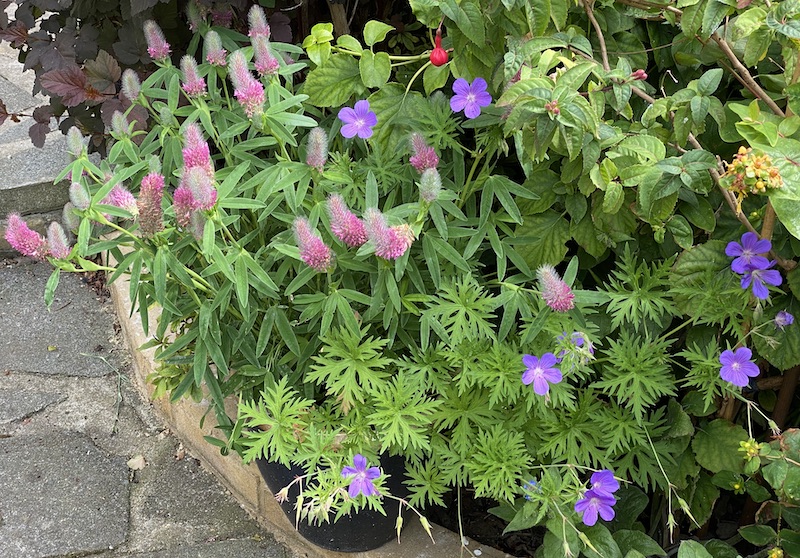 I blogged about ‘companion planting’ a few weeks back… the pot below is the matured state.