An unprecedented 23° C and a perfectly clear blue sky took me walking through a wet woodland full of bird song. Blue tits were busy readying their nest in the small hole in a birch. Robins were everywhere and tame enough to sit on your palm and take sunflower hearts. Maggie showed a walker how it was done and she was so thrilled when a robin landed on her palm. Maybe a  newbie birder had just been born. 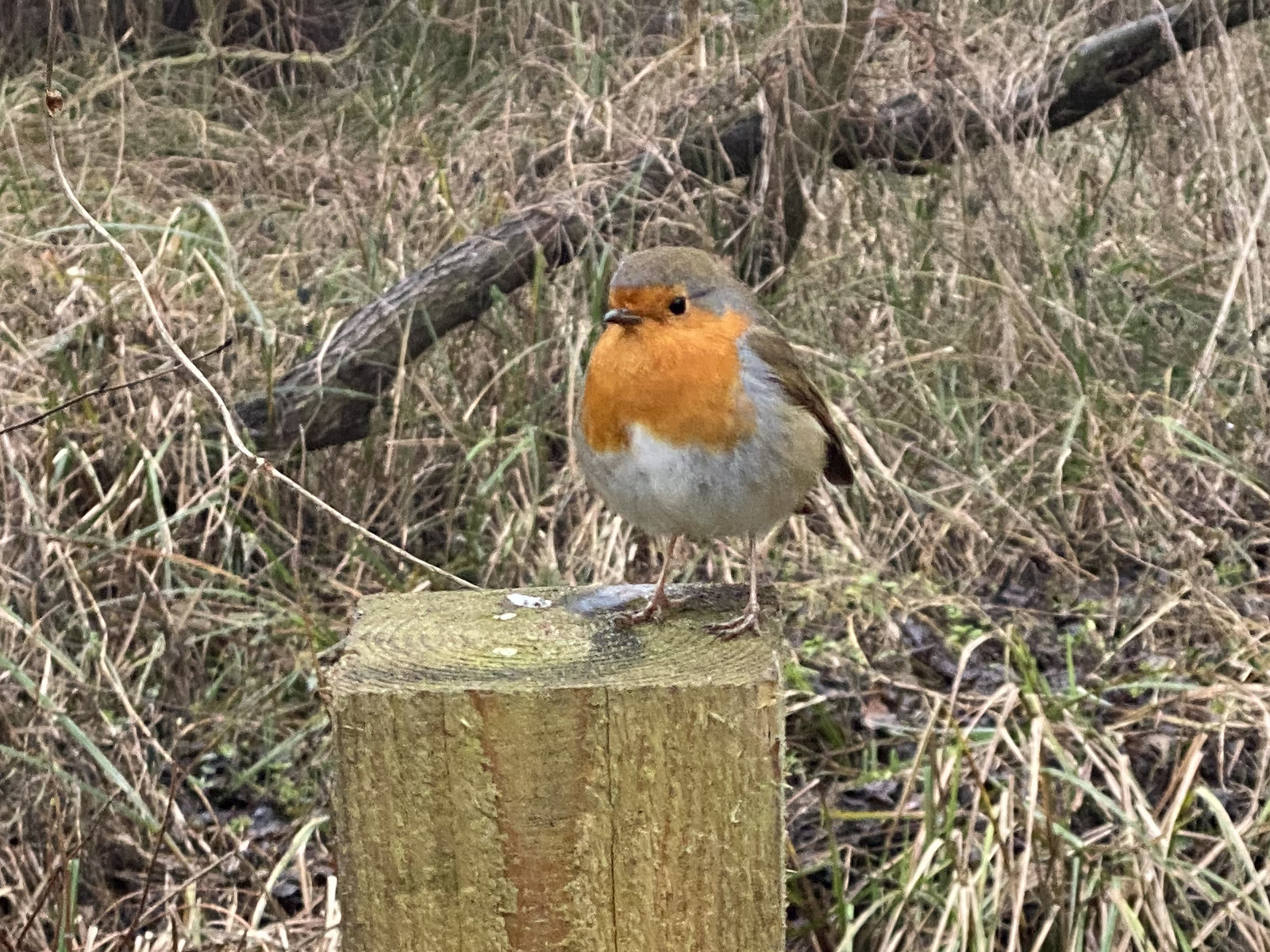 New tick for the year in the form of Cetti song; ‘chitza chitza chit!’ loud enough to deafen from far or near… they could whisper across seven fields as the saying goes. Last walk in the same place there were none. Today there were literally dozens. The oddest song we eventually tracked down to several song thrushes. Later reports suggested these were ‘continental’ birds passing through, that would certainly explain their foreign language!

Three months into the year but the pair of great-spotted woodpeckers that flew over my head were year ticks, as was the delightful treecreeper working its way up a tree then suddenly dropping to the foot of another to start again. 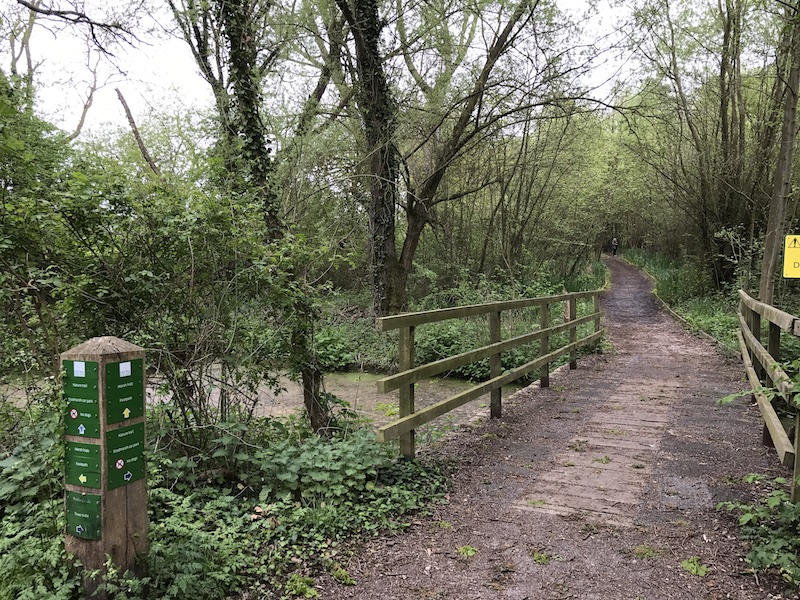 Back in the car to drive to the other end of the reserve… filled with more than a little envy of those who could stroll there and back through the reedbeds, past the main lake where only a day or two before a white-tailed eagle had paused its peregrination.

A three or four hundred yard walk (or in my case ‘push’ of the trusty ‘rollator’) was almost unprecedented. Like the change in global weather as the planet warms, my life seems more and more filled with ‘extreme’ events. Not weather but health. This last year has had troughs of totally debilitating sciatica, combining severe pain with an inability to do more than shuffle from one room to another. Respite allowing me to tidy up the garden after winter, but soon replaced by another flare, currently shoulder, back and neck pain as my collar bone grinds away at my shoulder joint. If I could cross my fingers I would, to hasten a steroid injection. But this unexpected bonus weather day saw me walk a second time to ascend the ramp and sit in the sun.

In high summer, when the water in front of me is at its lowest, there are usually a few sandpipers and other waders working the edges, a handful of ducks or geese delving and a few terns diving for food. If you are lucky yellow wagtails drop in to animate their bodies like miniature oil mules, cantilevered feather balls of colour.  In those evenings the air is full of swifts and hirundines scooping a sip of water or taking midges from the surface meniscus. Maybe one of the several dozen hobbies will race through the pack and pluck a martin for supper. 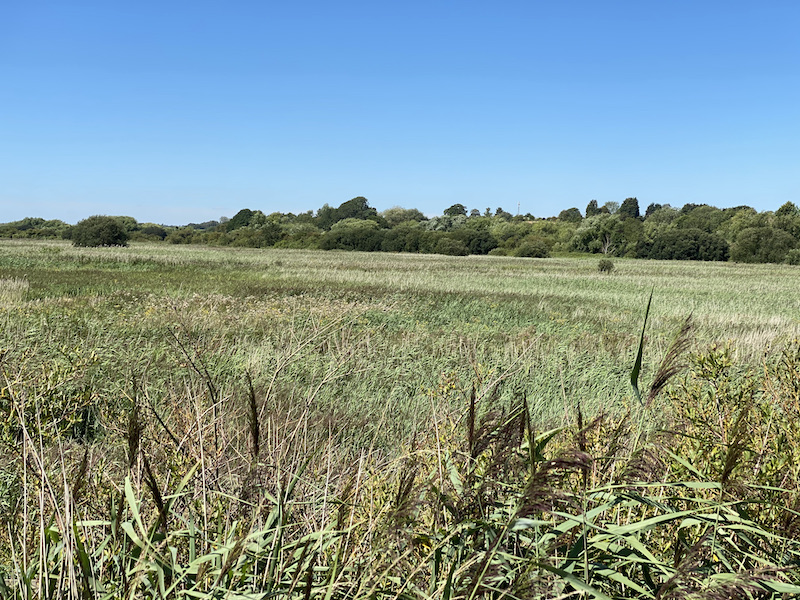 But, despite the lying weather, this is not high summer but an aberrant spring. Soaking up the rays while gazing across the reeds is pleasant but unproductive. A few reed buntings pop up where later there will be sedge or reed warblers. A pair of long-tailed tits prospecting for nesting materials hunt out gossamer, lichen and moss from the water-edge bushes. Overhead larks sing for all they are worth, and they are worth more than diamonds.

The lake is not just high but rammed with the un-departed. A handful of resident shoveler, gadwall and mallard are surrounded by teal and wigeon and a fine pair of pintail, all soon to be moving north to breed. One lone lapwing and a winter green sandpiper are eclipsed by the massed ranks of snipe… I count eighteen but surely at least as many more are ducked down, nestled unseen in the reeds. The usual two pairs of swan have been swelled to a totally unprecedented thirty-eight! I later hear this upped to sixty-one mute swans.

Marsh harriers abound but I see only males sometimes dropping into the reeds and always in the same places. It’s early, but I suspect females are hunkered down building nests or preparing to lay.

I walk back surprised that at mid-day, dew still glistens on every low leaf on the shaded side of the path despite the blazing sun. A week ago the solstice said Spring, but the weather was Winter. Now its Summer, but winter will be back again before Spring is truly sprung. As I write the temperature is in single figures and unlikely to get a double all day.