The perennial question asked by borders when they meet a fellow birder in the field is “Anything about?”. Often the reply is “…not much,” regardless of how many rare birds are packed into the field of view. But, as often, the birder will share what he has spotted and even helpfully put the enquirer on to an interesting or exciting bird. Pose the same question about my urban sanctuary today and the answer is definitely ‘not a lot!’.

It is an unseasonably wet, windy and cool day. Sensible bees will be tidying their hive and hover flies won’t bother to hover. Indeed the garden is ‘quiet’, not even many birds, although that might have more to do with the intrusive squirrel. So, I feel it’s the right time to introduce readers to my ‘background’ plants. Species that are long established, rarely score on an ‘excitement’ spectrum, but form the canvas on which flashy blooms are painted. 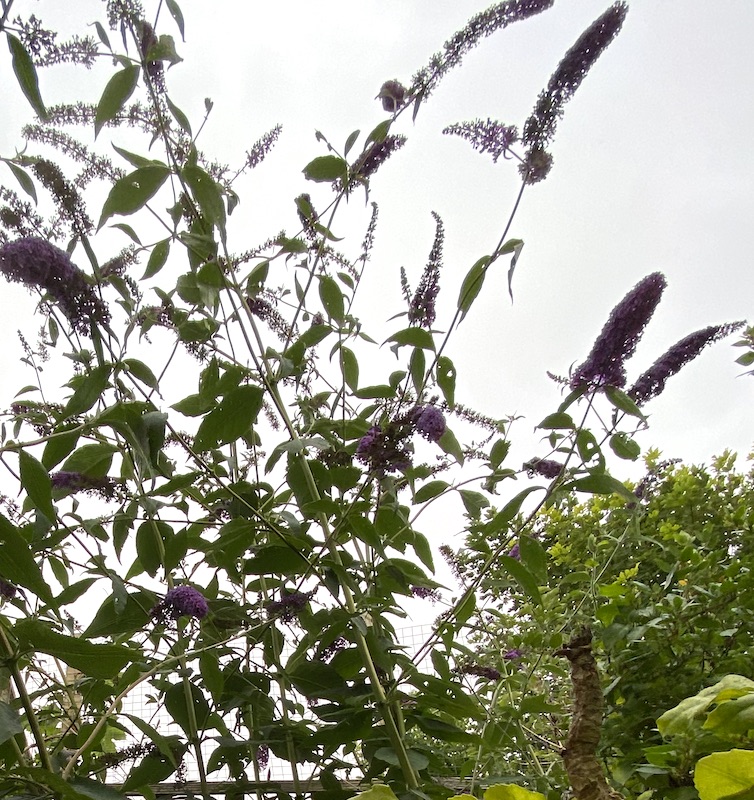 I have half-a-dozen of this Chinese species around the garden but most are kept small – the odd angle of this photo is because I’m looking up at the top of the plant which is about 10 feet tall. Known as the butterfly bush it is a magnet for any passing butterfly… this year it has been visited by Red Admiral, Gatekeeper, Holly Blue, Large & Small Whites, Brimstone, Comma and Small Tortoiseshell.

There are a number of other species including this one originally from Chile, which has yellow globe-like flowers rather than the purple spikes of B davidii. (Although trimming to keep ours from clogging our air con means it hasn’t flowered yet). 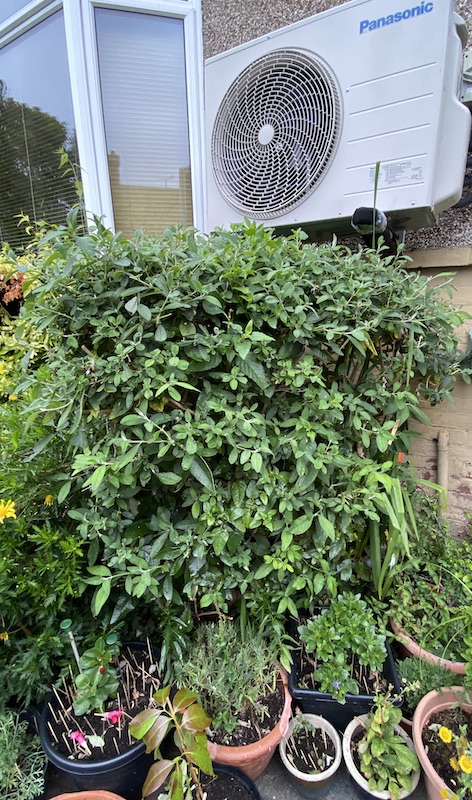 Earlier in this blog I misnamed the following shrub as Umbrella Bush – believing it to be just like the very similar indoor plant. This is how it currently looks, with it flowering earlier in the year below. Its evergreen leaves make it a natural background and guarantees winter colour. 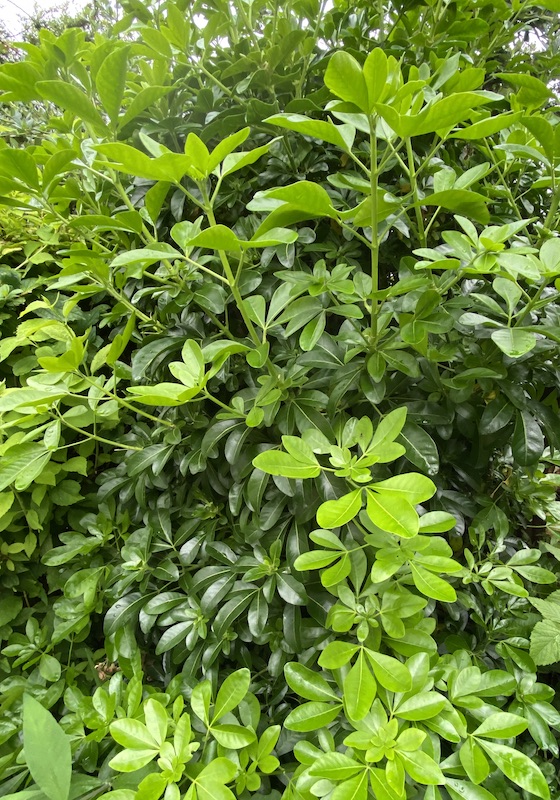 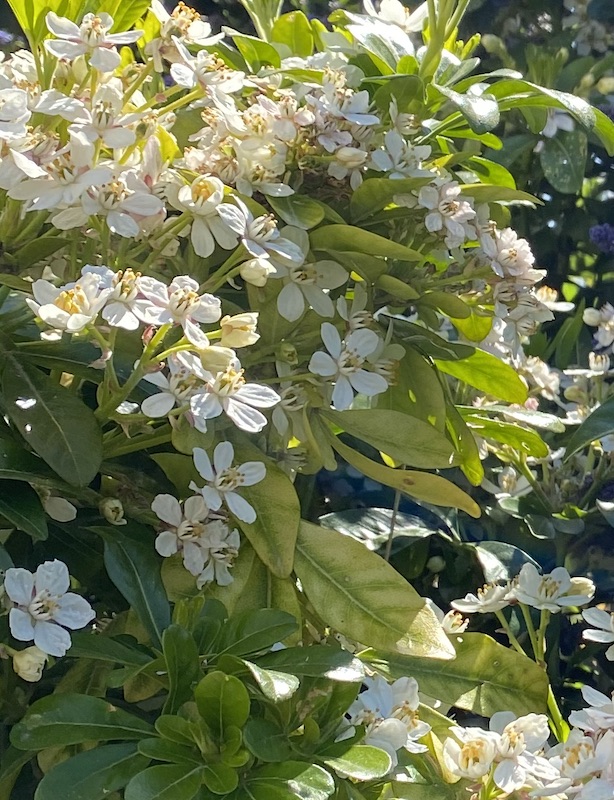 This year after nearly twenty years it has doubled in height after having its roots in manure and another bush cut back to give it more light.

When we converted our garage roof into a patio we added a trellis to the roadside end and a number of plants to shelter more tender ones. Whilst it has never really flourished or grown much this japonica does its job. 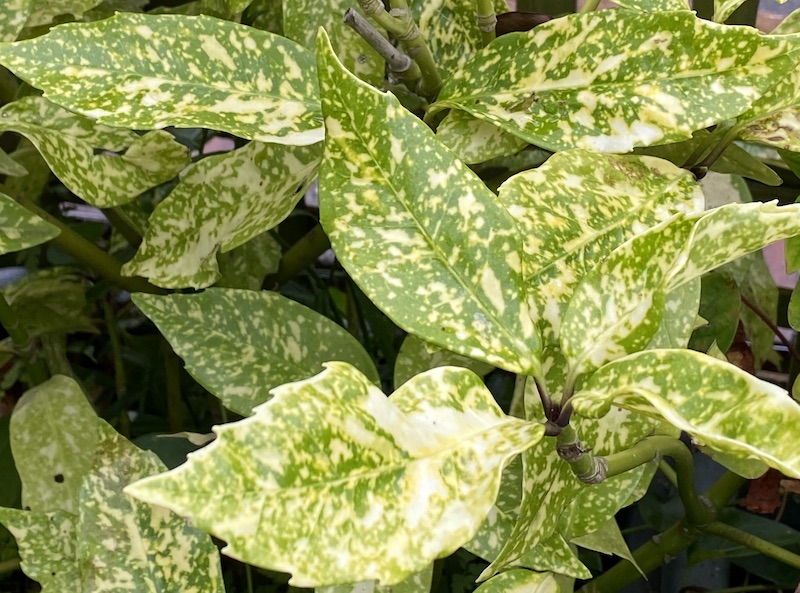 Originally I planted euonymus as a ground-cover plant in a dark corner. It didn’t do well and was out competed by vinca. So last year I dug it up and potted it. This year we put some pansies in the same pot which gives a splash of colour against its attractive variegated leaves. 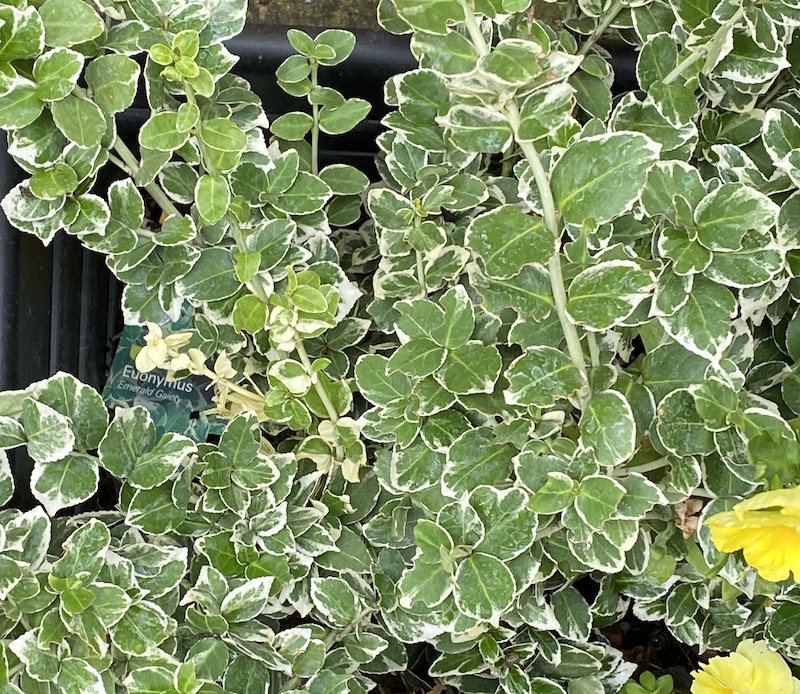 This pieris is rather outshone by the other plants around it, abelia, clematis and fuchsia. However, at times it puts on spurts of growth with the new leaves being vermillion. The yellow leaves peeping out here were red a few weeks back and the leaves further down are a deep, dark green. 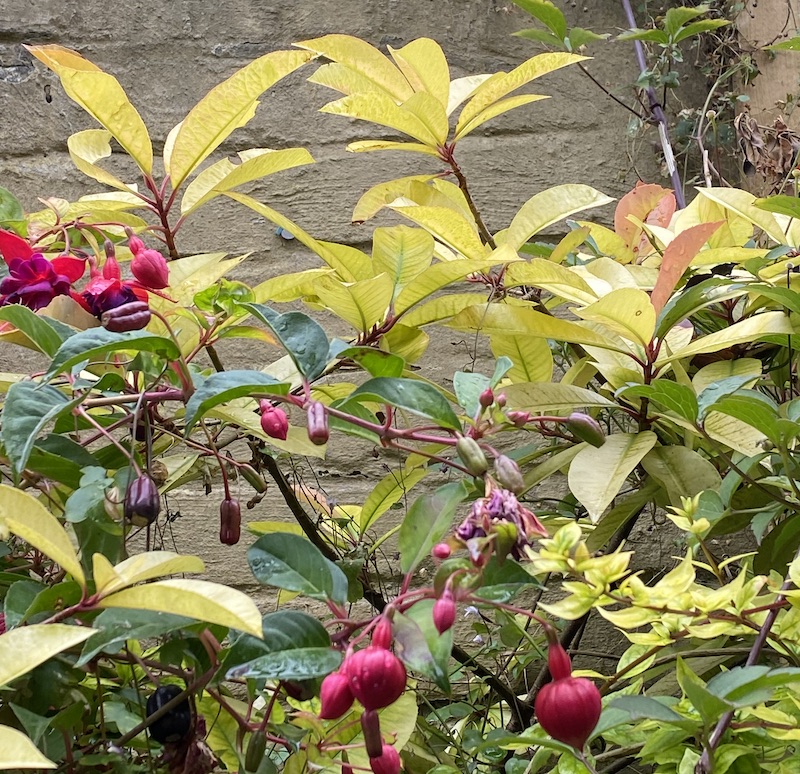 *This scientific species name refers to Pere David the Jesuit priest who travelled China and is remembered in the names of dozens of plants and animals. He has large entries in all my Eponym dictionaries see HERE