In 1981 I spent three weeks in Corfu. I went with a group of friends and was later joined by a girlfriend and another group of friends. We rented a villa near what was then a one-horse seaside hamlet. It had a shop, one tavern and a few houses. Our villa was a mile away up a steep muddy track through olive groves. I didn’t take binoculars and don’t remember much wildlife except the number of squished adders on the roads – each morning had a fresh crop. I recall just one bird as its song accompanied us up and down the track and around our villa – Olive Tree Warbler – the only one’s I’ve ever seen anywhere.

This was the one and only time I’ve seriously sunbathed… 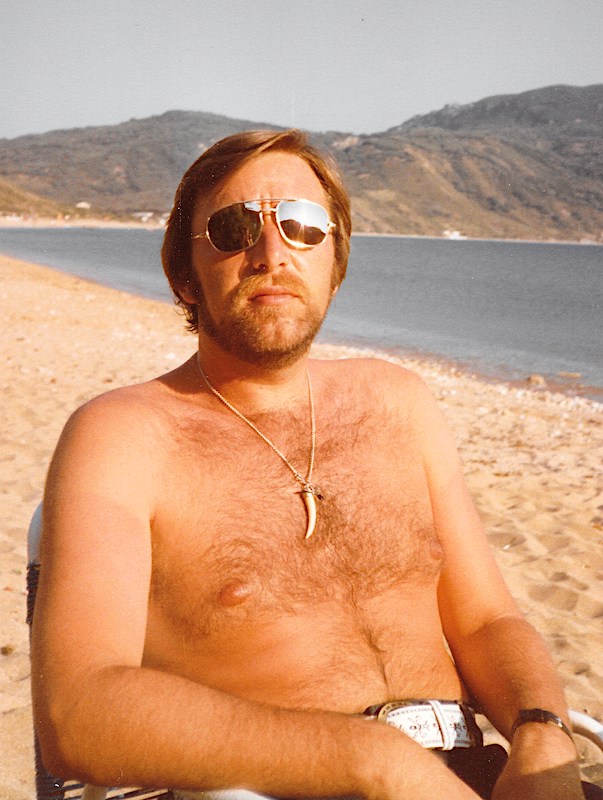 After two weeks exploring many of the people I was with, including my then girlfriend left for home. After they left my mate Theresa and I spent our days sitting on the beach by the taverna getting slowly sozzled on beer and Mataxa. Having a diet very rich in olive oil seemed to stop us burning… although one friend who fell asleep on the beach suffered badly.

I’m ashamed of the necklace… a gift, which was probably ivory 🙁

The walk home up the hill in the first couple of weeks was always to the narrative of scary stories we each took turns telling. It was pitch black away from the road and on moonless nights hard to see our way and spooky.

One night one of our number was telling a tale about a phantom horse when, coincidentally, a horse bolted out of the olives across the path in front of us. We were all startled, but none more so than JT. He jumped, slipped in the mud and began to roll down the hill. As he rolled passed he spoke, with each word punctuated by a full roll over saying, “don’t… you… bloody… well… laugh!”.

We fell in with a group of locals, socialists to a man. WW2 was still very sore to them and when German tourists walked by the locals spat behind their backs.

A sign of the times was that the other non-locals staying in the village were a group of orange clad followers of Bagwhan Shree Rajneesh who seemed to spend most of their time chanting and love making openly on the beach.