Strange couple of hours birding today… when we went out to post a letter. Having deposited the large letter in the post office box we were tempted out further by the sunshine and blue skies. It hovered around zero degrees with a gusting breeze clearly originating in Siberia taking that to a good -6!

Having heard there were black-necked grebes on Stonar Lake we went to look… the rough surface had pushed all the birds to the edges and shelter and in the freezing breeze I took shelter too. Being close to Sandwich we headed for the ‘Obs’. 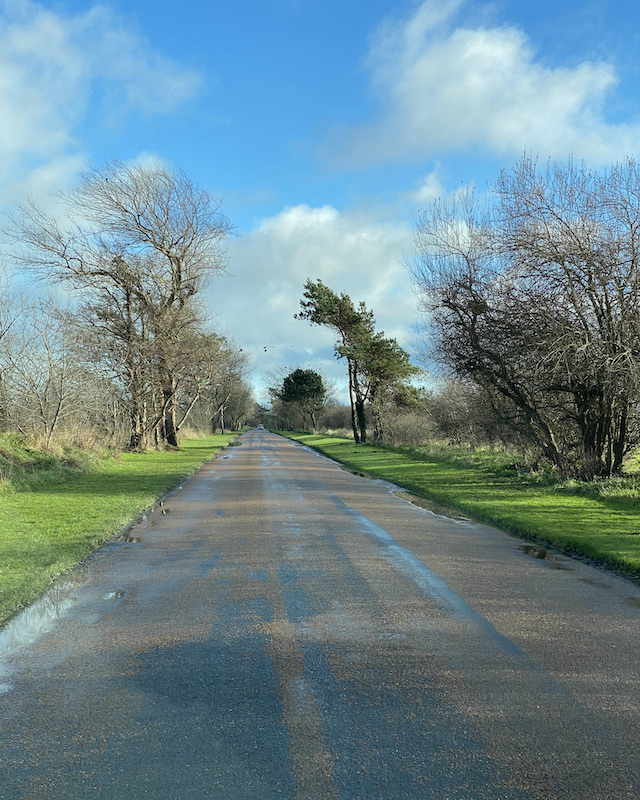 The Estate Toll road leading to the obs, before the snow.

As we got to the road off to one of the golf clubs, just before the toll I saw a bird flying in a dead straight line and called Maggie’s eye to it as it turned so that the sun showed its stunning azure rump and rusty flanks… a Kingfisher, first of six year ticks, excellent!

We drove along the estate road and close to Restharrow Scrape. The field nearby has been flooded for a few weeks and worth checking for gulls and a lapwing flock. Few of either but literally dozens of snipe everywhere working the wet field. Drawing a little further we stopped at Dickson’s corner. On the puddles and mud around the cattle hay, peewits, pipits and more snipe… every bird we saw fly was a jinking snipe. A Jacksnipe bobbed through the puddles edge showing his shorter bill, two more year ticks. Everywhere else we went was alive with snipe. Here and there were more pipits and another year tick, corn buntings looking fat compared with the slender roving pipits.

I have never seen so many, every wet field, puddle, ditch and mound being probed by the massive busy beaks. Driving along the Old Deal Road and back there were snipe everywhere. Every time I raised my bins a snipe flew through the view.

Looking, unsuccessfully, for geese we found a Merlin hunkered in a bush, until it took off at grass-top height and out of view. Only three grey partridge rather than the larger coveys but more song-thrushes than I have seen in ages. A few redwings unusually feeding on the ground too.

We drove away still marvelling at the snipe numbers and a couple of miles away towards Pegwell Bay we still saw them flying by of feeding on the golf course or fields. Must have been a massive influx.

Last year tick was of a couple of splendid Pintails on the Garage Pool.

A twenty minute outing to post a letter turned into three hours of superb birding.