Then was our winter of discontent…

When I were a lad… well in the winter of 1962-1963 anyway we had harder winters than we do now, and they also lasted longer. Currently, we have snow on the ground likely to last a week and it’s a bit of a shock. But, I remember Christmas, New Year 62/63 the snow stayed on the ground around eight weeks! Then, like now, the temperature never got into positive figures… although you wouldn’t have said that then as we counted in Fahrenheit! The scene below would have been impossible before the escaped parrots started to breed over here. 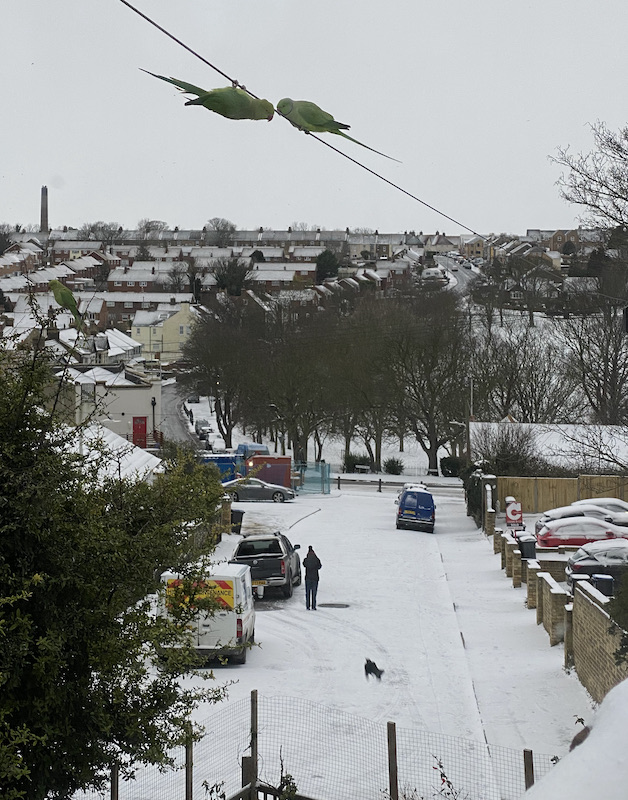 People might have cleared the paths back then, though. 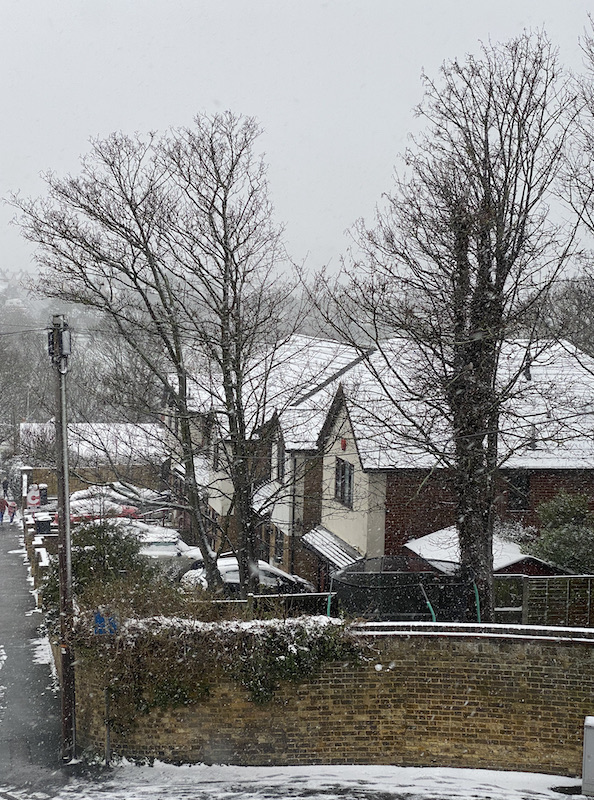 Two scenarios from back then are burned into my memory no matter the 60 year gap.

The first was our milkman, bravely delivering milk on Boxing Day Morning, albeit with half an inch of frozen milk popping up the milk-bottle lids so they sat like little caps on thick necks. His tenacity and loyalty to customers was duly noted and many households offered him a ‘nip’ of whisky or brandy to keep out the cold. Too polite to turn anyone down he swayed and meandered to each house and his milk-float skidded crazily down the road. Despite his inebriation the police station waved him on his way as so few pedestrians or vehicles were about he could do no damage!

The second memory is of walking along the top of hedges!

In February, back at school ten miles away I had to catch the bus. On one day the snow set in again and only the main ‘A’ road was passable. School closed early and we set off home. I was dropped off near a farmyard gate to cross a couple of fields and walk down a lane to home. The snow was so deep I had to ascend the verge to the top of the hedge and walk along it until entering the field without having to step down. Lucky for me, as I walked up the steep hill in the field most snow had been blown off the tops and it barely covered my shoes. AsI reached the alley leading to our street I had to climb over the frozen gate and was once again walking over four or five feet of snow! When the lane ended and our road began it was a bridge over the railway. From there home was one long slide.

Back then we were not dismayed by the weather, nor did we postpone or cancel anything. We were still in the post-war era after rationing when life seemed good and hardships shared were no cause for discontent.